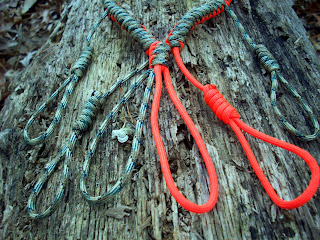 This is a custom lanyard that incorporates the entire duck hunters needs. The 4 "drops" or noose knots are for holding duck calls.  The 2 loops are for attaching dog shock collar controllers or any other retriever device. With a simple "larks head" or "cow hitch" these loops will hold these devices secure while letting your hands stay free. 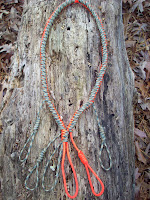 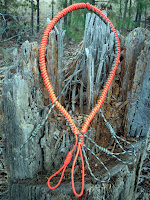 The color of this lanyard was camouflage on one side and orange on the other. This way the orange stays hidden from the ducks but is there if you loose it in the brush.
﻿﻿
﻿﻿
Posted by Zack at 3:49 PM No comments: 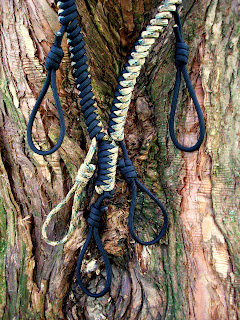 I made my first duck call lanyard for a buddy at N.C. State. He wanted a lanyard to hold 5 calls in black and camo color. I learned a lot from making this lanyard and I've also made changes since this one. The first thing I learned was the design. The design is essentially two stands of para-cord in a snake-bite braid . I started in the middle of the two ropes with a square sinnet knot. This allows the cord to remain strong by not compromising it by cutting and knotting it back together. For the "drops" or nose knots that hold the duck calls I put 2 para-cord strands in the middle of the snakebite braid. This gives more strength to the braid and insures the drop will not break or come apart from the lanyard. 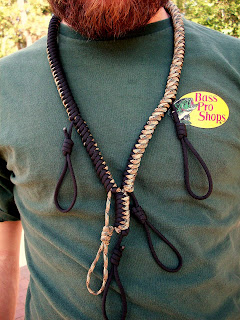 I also try to use each aspect of the rope for something. I've seen others tie onto their lanyards to make drops. My system doesn't rely on knots but rather each cord is made into the lanyard. Also if I cut a piece of rope it has two ends. I try to use both ends by running each out of the lanyard to hold duck calls. I used 3 pieces of rope (so 6 ends) to tie this lanyard. 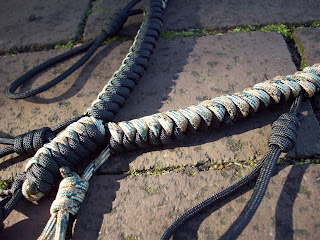 I've learned a lot since this lanyard that has lead to some design modifications. I use more cord for the "drops" in an effort to let hunters pick up one call at a time without moving the rest of the lanyard. I also make each side one color instead of both sides being both colors. For example on this lanyard one side would be black and the other camo. I'm still learning and updating my design. My hope is to continue branching out with different designs and applications of para-cord.
Posted by Zack at 9:57 AM No comments: 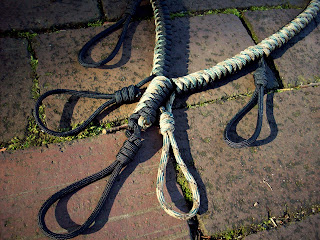 I'm working with Chris Harrell of http://quackycalls.com/ on duck call lanyard systems. Chis is located in eastern North Carolina and makes custom duck calls and turkey calls. If you go to the store section you can see pictures of my custom lanyard systems. You will also see order options for colors available and styles. Also check out Chris's calls they are priced affordable and are of high quality.
Posted by Zack at 8:43 AM No comments: 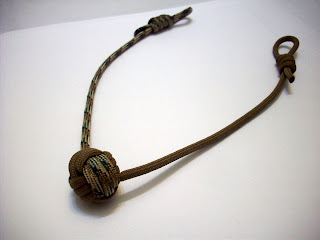 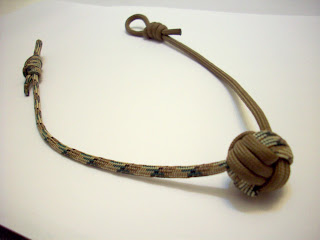 I really like making the monkey fist knot and I wanted to see what it can be applied to. I tied this using JD's design of knotting two pieces of para-cord together (I used a lanyard knot but an overhand knot will do) for a two color design. Since I used para-cord and not a steel ball for the middle of the monkey fist it's light weight but still has the look of a regular monkey fist. I tied multiple overhand knots to attach the croakies to your glasses.
Posted by Zack at 8:28 AM No comments: 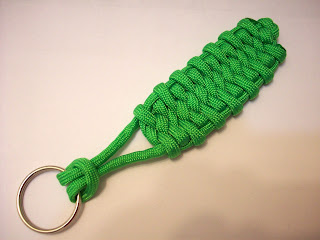 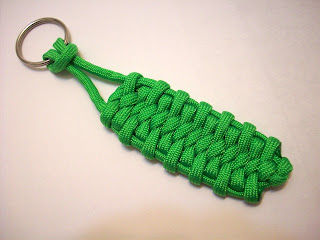 This is a bug belly bar key fob in neon green. I've seen this in a bracelet and on a clip so I'll probably try that soon. I really like this design it's wide and flat and it also is very intricate.
Posted by Zack at 8:16 AM No comments: 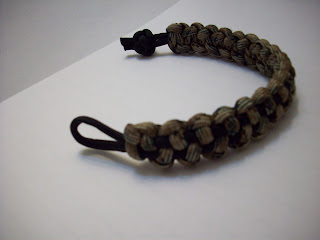 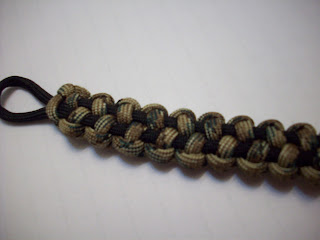 This is a stitched solomon bar bracelet in black and woodland camo finished with a lanyard knot. I really like this design because it is slender and it is a little thicker than others.  The design is from JD of TIAT. Also Stormdrane has his own versions of this design.
Posted by Zack at 8:01 AM No comments: